Why it is important?

"Waste not, want not," they say. This old adage is especially relevant today, as global leaders and local communities alike ask for a solution to the so-called "throwaway culture." However, trash is a larger issue that affects human health and livelihoods, the environment, and economic development in addition to individuals and households.

Over the next 30 years, increased urbanisation, population expansion, and economic development will cause global waste to increase by 70%, reaching a startling 3.40 billion tonnes of waste generated yearly.

Solid waste management is a global issue that affects every individual on the planet. And because over 90% of rubbish is dumped or burned openly in low-income nations, the poor and most vulnerable are disproportionately harmed.

Landslides of rubbish dumps have buried homes and individuals under heaps of waste in recent years. And it is the poorest who frequently live near waste dumps and rely on rubbish pickers to power their city's recycling system, putting them vulnerable to major health consequences.

More than 70% of collected urban waste is thrown in India's landfills, which are already overflowing.

“Environmentally sound waste management touches so many critical aspects of development,” said Silpa Kaza, World Bank Urban Development Specialist and lead author of the What a Waste 2.0 report. “Yet, solid waste management is often an overlooked issue when it comes to planning sustainable, healthy, and inclusive cities and communities. Governments must take urgent action to address waste management for their people and the planet.”

Waste disposers will "no longer be burying or burning people's garbage as they do now" by 2025, according to Marcus Gover, director of the UK advocacy organisation WRAP. These businesses will merge to form the "reprocessing industry," in which the primary goal is to return "useful materials to producers" rather than dump waste.

Designers and manufacturers must also rethink their approaches. Gover claims that today's items must be viewed as tomorrow's raw materials. When that happens, items will start to be designed to survive longer and be easier to fix and eventually deconstruct. The easy-to-disassemble lightbulb from Phillips is an excellent example.

According to research, investing in sustainable waste management makes financial sense. Uncollected rubbish and improper waste disposal have serious health and environmental consequences. The expense of dealing with these consequences is many times that of constructing and managing basic, adequate waste management systems.

The World Bank is working with governments, communities, and partners around the world to develop and finance effective solutions that can lead to improvements in environmental, social, and human capital.

Since 2000, the World Bank has invested more than $4.7 billion in over 340 solid waste management programmes around the world, including the initiatives and areas of engagement listed below.

Understanding how much and where trash is generated, as well as the sorts of waste produced, allows local governments to allocate budget and land more realistically, evaluate applicable technology, and consider strategic service providers such as the private sector or non-governmental organisations.

Waste management's future begins and ends with technological advancements. To advance its work sector, the waste management industry, like every other industry, must become digitised and data-driven. Smart and competitive is the future! Businesses, in particular, are expected to be one step ahead of their competitors.

Data is collected when smart waste management technologies are used over time. These data from hand sensors can be utilised to spot fill trends, optimise driver routes and schedules, and cut expenses. The cost of these sensors is continuously reducing, making smart bins increasingly affordable to use and appealing to businesses and city officials.

Think of carbon fibre. On the one hand, it's at the forefront of transportation innovation, with companies like McLaren and Airbus ecstatic about its strength, weight, and energy efficiency. However, little care has been given to its re-use or recycling. He goes on to say that closing these "resource cycles" is critical. "We'll also need more ingenious technologies to swiftly and efficiently separate materials for recycling."

One requirement is to automate the separation of plastic from paper. It's also crucial to distinguish one plastic polymer from another. Near-infrared spectroscopy could provide an answer in this case. The approach uses diffuse reflection to differentiate individual polymer compositions based on their spectral characteristics.

In 2012, only 5% of food waste avoided landfills. This means that millions of tonnes of food are still sitting at the bottom of a landfill, waiting to be transformed into nutritious compost for personal or municipal consumption. As a result, more cities around the world are implementing organic material composting programmes, with some even making it mandatory. We can only hope that the growing interest in composting will continue.

Eco-Friendly is more than a buzz

Since the last century, the term "sustainability" has been used in the media, but business module approaches to sustainability have recently acquired prominence. Companies have begun to promote themselves as environmentally friendly in order to improve their sustainability and customer service.

Measuring demographic awareness for home and individual waste management practices and taking action against them is viewed as a benefit to society that the government can deliver. We shall see a lot more recycling actions in the future of garbage management. Although recycling appears to be the most important system component here, more widespread public participation in the creation of a more effective waste management framework is critical.

It's no news that most plastics take hundreds, if not thousands, of years to disintegrate (which is still awful for the environment), and that they're extremely harmful to local ecosystems and species. As a result, several communities are addressing the plastic garbage generated within their borders. Styrofoam in particular has been widely addressed over the years, and cities and towns around the country are gradually enacting restrictions on polystyrene foam food packaging. While it is cost-effective and sturdy enough for packaging, its small weight makes it susceptible to wind dispersal, and it can seep substances such as styrene into the groundwater. With Styrofoam restrictions, plastic shopping bag bans, and even plastic bottle bans, the movement to phase out unsustainable and widespread plastics like these should continue.

3D Printing: Effective use of materials

3-D printing has opened doors to manufacturing that were never imagined before: from commercial and mass-production applications to more private, personal applications at home. 3-D printing technology may be able to construct a house in a single day. Of course, this technology has the potential to increase our reliance on plastic even more. Thankfully, some people are discovering that ground-up plastics from around the house — including used Legos and other plastic garbage – may be used to print with. Imagine if a completely new market for plastic trash was created to be used in 3-D printing. In many cases, recovered plastics are cheaper per pound than virgin plastics. 3-D printing has numerous advantages, but we must ensure that the materials used are as environmentally friendly as possible.

Supporting governments in making essential solid waste management funding, policy, and planning decisions is critical with a focus on waste data. Some suggestions are: 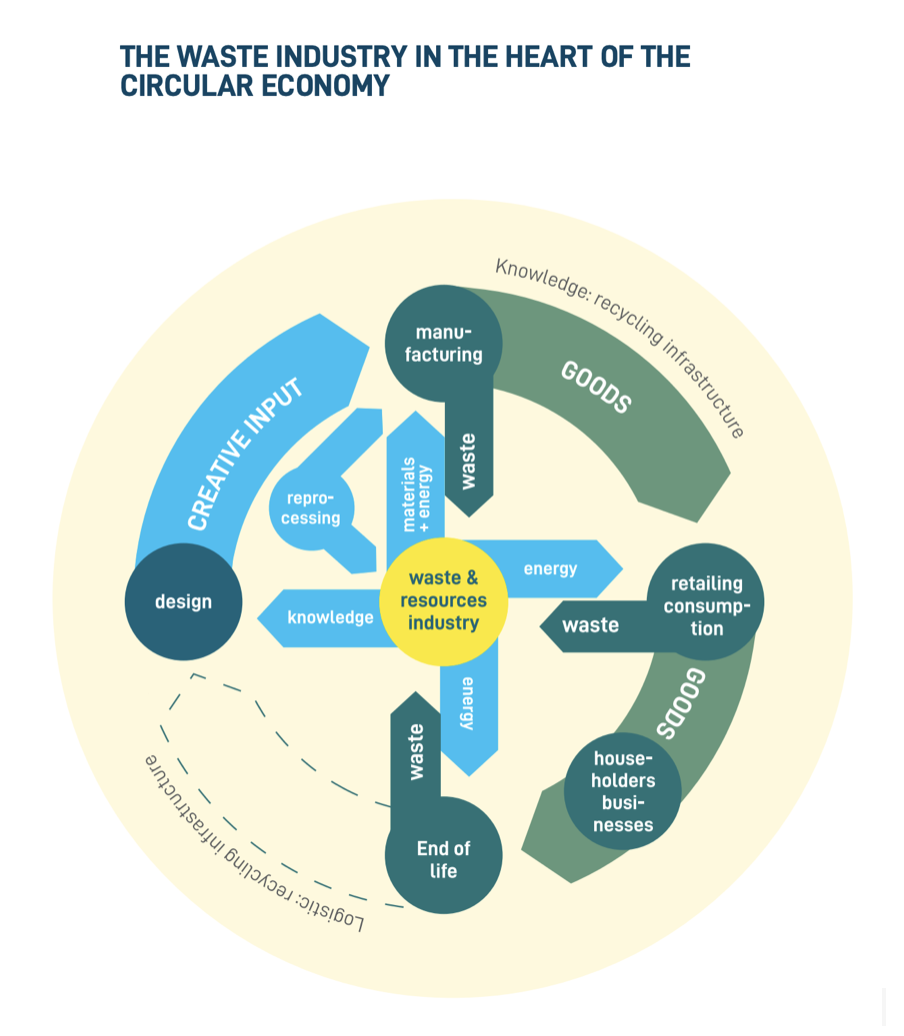 The Future of Plastics is Biodegradable

This isn't something we haven't seen before, but the market for such products is rapidly expanding, as is demand. According to recent estimates, sales of biodegradable plastics are growing at a 19% annual rate, demonstrating the world's inability to handle all of the plastic bags that have already entered the ecosystem.

Despite the material's effectiveness, there is no method for these polymers to biodegrade when they are discarded in the environment. To process this material, adequate recycling technology is still necessary. Plastic that dissolves in three hours is on the way in the coming years.

Scientists have developed a technique to create plastic material that reacts to sunlight thanks to photo-triggers embedded in the new substance. If the majority of the world's population adopts this technology, we may be able to eliminate the problem of plastic trash poisoning the environment for centuries.

Electronic Recyclers International is the business in charge of putting this cutting-edge technology into action, which can recycle up to 30,000 pounds of electronic waste each hour. This is far more than the typical amount of e-waste processed before this future equipment became a reality.

It took Electronic Recyclers International one billion pounds of electronic trash recycling to get to this point, and it is now doing an even better and more effective job of waste management and research in the future. Consider the company's progress over the following ten years. Perhaps the world will find a solution to the worrying rise in e-waste, which has now reached staggering levels of over 93 million tonnes per year globally.

Mumbai produces the most e-waste: almost 1.2 lakh tonnes per year. With 98,000 and 92,000 tonnes, respectively, Delhi and Bengaluru come in second and third.

This sophisticated piece of technology, also known as an automated vacuum collection system, ensures the speedy transportation of waste via pneumatic tubes installed beneath the earth. When garbage enters the system, it travels until it reaches a collecting depot, where it is sealed in containers and prepared for transportation and disposal.

What's futuristic about this notion is that if it's expanded further, it might eventually be utilised all over the world – one system to manage all the rubbish, with underground pipes connecting it all. An advanced automated segregation system might be the collecting system's exit point, performing the necessary processing before the recycling process completes the loop.

Most wastewaters contain ten times the amount of energy required to treat them. The water-energy nexus is the notion that makes this a reality, as it enables energy generation from wastewater an incredibly profitable and practical technique of utilizing waste as a source of energy. The benefits are numerous, including less pollution, increased energy, and cleaner water that may be used for a variety of purposes.

With the help of microbes, scientists from a Barcelona university discovered a way to absorb organic substances in wastewater. Organic waste in wastewaters is converted to hydrogen during the process, making it simple to convert into pure energy later. This not only reduces the cost of wastewater treatment, but also produces a byproduct - free energy that can be utilized, sold, or stored.

The Energy-Waste Nexus: Partnering with Biology

According to Grand View Research, the global market for recycling trash into electricity is estimated to reach $37.64 billion by 2020.

While thermal technologies have seen the most growth yet, biological technology could bring a huge breakthrough. Justin Keeble, managing director for sustainability services at Accenture, is a proponent of the latter, citing a new generation of companies that use 100% biodegradable feedstock and advanced biotechnologies.

LanzaTech, an Illinois-based biotech startup, uses patented microbes to transform carbon-rich waste into biofuel via a gas fermentation method, according to Keeble's list. Another is Novozymes, a Danish biotech company that just introduced Eversa, an enzyme-based solution for converting wasted cooking oil and other low-grade oils into biodiesel.

One thing is certain: the future of sustainable waste management and the reduction of electrical waste will be centred around processes like the ones described above, because they all have the same end goal: to achieve maximum efficiency in terms of productivity, the use of the least amount of resources possible, and the use of technology rather than actual people to do the hard work, because any contact with waste matter reduces the life span of all living organisms. Below are some of the initiatives.
Inclusion of composters
We suggested composters to ensure low landfill, it helps to reuse the waste material. These composters are very beneficial for soil and it helps to improve the soil quality and fertility. The introduction of a compositor helps in generating energy, the compositor converts the waste material into electrical energy. The decomposition of the waste can be done in less than 24hrs.